‘I’m a big believer in giving things a go, even if you don’t know much about it. If you do not enjoy it, then don’t do it again!’, says E Comp Ian Burgess. It’s a philosophy that has taken Comp Ian to race at Silverstone, build fuel storage facilities in the Falklands, be a leader in the Duke of Edinburgh’s Award scheme, and even made him enter Freemasonry.

Comp Ian was born in Thatcham, near Newbury in Berkshire, but lived in Guildford, Surrey. He attended the Royal Grammar School in Guildford. Attaining both ‘S’ and ‘A’ levels in maths and physics, along with an ‘A’ level in chemistry, Ian read Engineering at the University of Bath after a year of undergraduate training with British Aerospace in Bristol. ‘There was no real logic [to studying Engineering]‘, Ian recalls, ‘it just seemed to be a natural progression from maths, physics and chemistry. I always think that choosing a career is probably the hardest thing someone does from school to university, and there are so many careers to choose from – how do you choose what’s right for you? I’m still taking the view that I’m trying to work out what career is right for me!’

It was at university, however, that Ian next found what felt right to him. At his ‘fresher’s fair’, he saw a stall promoting the University Officer Training Corps. Following his philosophy of ‘giving things a go’, Ian signed up and found he enjoyed it – so much so that he signed up for the Territorial Army shortly afterwards. Ian was awarded a commission as an officer in the TA. After a summer spent travelling around Europe by train, eventually sleeping on the beach in the South of France for two weeks, Ian attended the Royal Military Academy, Sandhurst, joining the Royal Engineers and receiving his Regular Commission in 1987.

As an Officer of the Royal Engineer Corps, Ian provided direct combat engineer support to the Airborne Brigade, including advice on mine laying and clearing, bridge building, and, more enjoyably for him, demolition. His role as Demolition Range Safety Officer included ‘making safe’ the explosives that, for some reason, had not detonated, usually by setting off another charge next to the unexploded charge. Whilst required to retire to a safe distance of 1,500m, Ian would typically save time and effort by retreating to a local blast hole near the charge and detonating the explosive – usually resulting in a ready covering of dirt and debris! 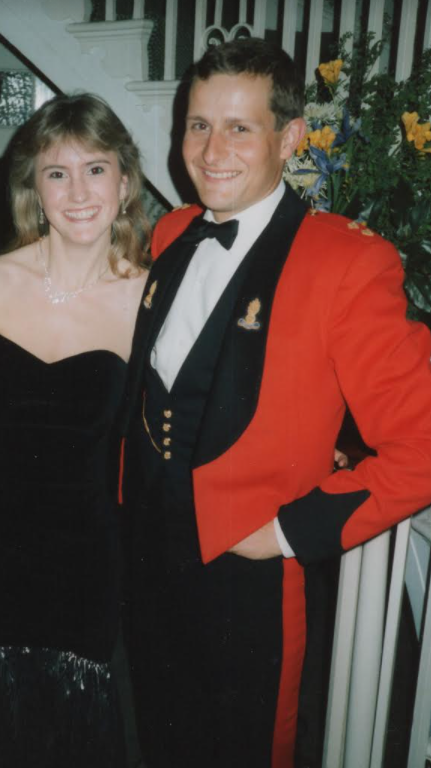 Being in the Army gave Comp Ian the opportunity to really live out his mantra of ‘giving things a go’, embracing the opportunity to experience both the Army as well as sport – through diving, climbing, parachuting, game and clay shooting, skiing and sailing, the latter of which Ian has kept up as a hobby for many years afterwards, even taking part in the Round the Island Race three times!

Another lifelong passion that Ian found in the Army was motorbiking. Originally this was born of necessity – ‘motorbikes were my primary transport as a Troop Commander as it could be loaded into a Hercules transport aircraft used by the Airborne Brigade!’  – but continues to be something Ian is active in, including taking part in off-road biking in both the UK and Spain.

After four years’ service, having received the rank of Captain, Ian left the Army; but ‘unwilling to pursue a typical ex-forces career in mine clearance, security, or selling pensions, I decided to broaden my skill set and knowledge of potential job opportunities so qualified as a Chartered Accountant with Ernst & Young.’

Joining their graduate scheme, where he was jokingly referred to as the ‘old man’ by those on the scheme who had only just graduated, Comp Ian credits his time at Ernst & Young for allowing him to go and see the inner workings of different companies, charities, and organisations in various sectors, to help him decide which industry he wanted to work in next. Ultimately, Ian decided on banking and remains in the industry 25 years later. ‘Banking is quite similar to engineering,’ says Ian, ‘as it utilised my skills for numeracy, problem-solving and project management as well as negotiation of legal documentation. It also usually involves flexibility and decisive action to ensure results are delivered on a timely basis to ensure you meet deadlines for the completion of transitions.’ Beginning at the merchant bank Kleinwort Benson, where he was made a director by the time he was 30, Ian went on to work for HSBC, CIT Bank, and The Royal Bank of Scotland before returning to HSBC, where he remains today.

As for Freemasonry, that was another aspect of Ian’s life that came from the Army. Two of Ian’s friends from his time in the Army approached him about joining Freemasonry. At the time, Ian knew nothing about the fraternity but, with his philosophy of ‘giving things a go’, it wouldn’t surprise the reader to learn that he didn’t take long to fill out his application form. ‘Like many people who don’t have much knowledge about Masonry, it was a bit of a leap of faith – but I’ve never looked back.’

Ian was Initiated into Highbury with Benefactum Lodge No 2192 on September 27th, 2001 and took to Freemasonry quickly. He was exalted into All Saints with Benefactum Chapter No 1716 in 2005 and was Installed as Master of Highbury with Benefactum in 2007. At this point, Ian was ‘quite happy pottering around in my own Lodge, not really knowing what else was going on elsewhere, until I received a letter.’ That letter informed Ian that he had been appointed a Metropolitan Grand Steward.

‘I didn’t even know what a Metropolitan Grand Steward was! I knew nothing about Metropolitan Grand Lodge – I was aware there were talks of its formation when I first joined and heard about the event at the Royal Albert Hall, but it didn’t mean anything to me at the time.’ Ian says that the appointment opened up the wider world of Freemasonry to him, attending several official visits during his year. ‘I would encourage every London Mason, who has not already done so, to attend a Metropolitan Meeting and chat to the Metropolitan Grand Stewards and the other Active Officers if they are interested in having a greater involvement in London Freemasonry.’

After his active year, Ian was soon approached about becoming a Visiting Officer. ‘It was a bit weird as a younger person – you always see Visiting Officers as being very experienced Masons, but I was only a newly invested LGR! I found, however, that I had a lot to offer these Lodges with help and support and have made many new friends in the process.’

Finally, after three years as a Senior Visiting Officer, Ian received his most recent appointment – Metropolitan Grand Inspector. Despite having worked closely with Inspectors as an Escorting Officer, an SVO and a MetDepGDC, ‘it still feels surreal to have this appointment, but it’s certainly a great honour. I have 50 Chapters to support, and I am keen to meet them all as soon as possible to see how we, as a team, can assist them if they so desire.

Freemasonry is about enjoyment, and really that’s what my role is, together with the SVOs and the VOs – to support our Lodges and Chapters to help them enjoy Freemasonry as much as possible, and I am very much looking forward to it!’

– Qualified as a Yachtmaster Coastal skipper
– Has a race licence and races Citreon C1s in 24-hour races, including at Silverstone
– Has completed a half marathon in 90 minutes
– Has driven the Army’s main battle tank, the Challenger Mark II
– Is a regular blood donor, having donated on over 50 occasions